A rapidly growing bush fire that started in the Sylmar area of Los Angeles, less than 30 miles from downtown, late on Thursday has led to a mandatory evacuation order for around 100,000 residents in the area, and as of Friday scorched 4,000 acres of land.

Mandatory evacuations were issued to neighborhoods north of the 118 Freeway from Tampa Avenue to the Ventura County Line, and area covering some 100,000 residents, according to the Los Angeles Times.

The bush fire broke out late on Thursday in Sylmar has been dubbed the “Saddleridge Fire.”

The Los Angeles Fire Department estimate the size of the fire at 4,000 acres, and said around 12,700 homes would be under mandatory evacuation.

No injuries have been reported as of Friday, but the fire department said that numerous homes and “one commercial building” had been destroyed by the blaze. 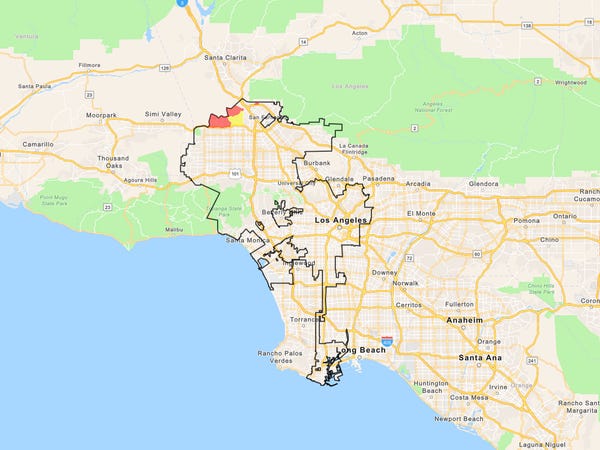 A live evacuation map from the LAPD warning residents to evacuate from the raging bush fire in LA.

Areas facing urgent mandatory evacuation are highlighted in red, whereas “evacuation warning” areas are in yellow. 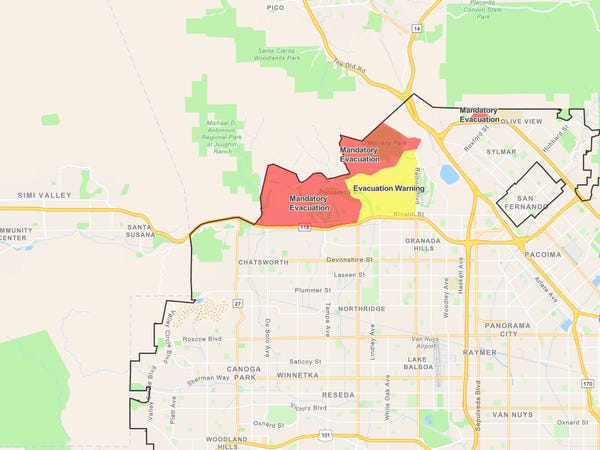 Mandatory evacuation is highlighted in red and evacuation warning areas in yellow.

In a tweet, the LAPD said in these areas residents in the yellow “evacuation warning” zones are expected to “be prepared to evacuate immediately if needed.”

According to local news channel abc7, the 210 Freeway was shut down in both directions between the 5 and 118 freeways as a result of the fire.

Residents and people in the area have posted videos and photos of the fire online.

A correspondent for ABC news filmed his route driving along the Sesnon Boulevard going toward Porter Ranch.

High flames can be seen on their side of the road and heavy smoke and winds are in the air.

He described the scene as a “hellscape.”

Horses and cows have also been evacuated from the Sylmar area.

Resident Matt Rampias recorded footage of the fires from his home.

The footage shows a line of fire in the distance as well as a smokey, red sky.