In its bid to win more consumer deposits and grow revenues in the US, Citigroup is targeting new territory for expansion.

On the list are cities across roughly a dozen states outside Citi’s current retail bank footprint where it has large caches of credit-card customers and ATMs.

Citi’s push into new banking markets like Washington, Texas, and Minnesota, laid out by US consumer banking chief Anand Selva at a financial conference on Tuesday, may include a “light physical presence” with new storefronts.

But the strategy remains digital-first and the quest to boost deposits won’t involve a head-to-head battle with branch behemoths like JPMorgan Chase, Bank of America, and Wells Fargo. Those banks, plus Citi, make up the top four US banks by assets

Instead, in the markets Citi is targeting, the bank views itself as a “digital challenger” that happens to have a “large untapped existing customer base” of 28 million credit-card customers and a massive ATM network, Selva said.

Citi’s US consumer banking business has for years lagged behind its peers, especially in the crucial game of winning deposits from customers.

In that bread-and-butter business, which is a low-cost way of funding more lucrative lending activities, Citi holds a 4% market share, with $550 billion US deposits, according to mid-year FDIC data compiled by S&P Global. Bank of America, Chase, and Wells, by comparison, each have a more than 10% share with more than $1.3 trillion in US deposits.

Part of this disparity is explained by Citi’s retreat from brick-and-mortar banking post-financial crisis. The firm cut bank branches by about a third to under 700 and scaled back its territory to just six major markets: Chicago, Los Angeles, Miami, New York, San Francisco, and Washington, DC.

The other big banks have several thousand branches each stretched across the country, dwarfing Citi’s physical presence.

Citi has been working to remedy its deposit woes, not by building more branches but by tapping into two assets it already has in spades: ATMs and credit-card customers.

Citi views its credit-card network — the second-largest in the US behind JPMorgan Chase — as a potential goldmine since less than 10% of these customers have a broader banking relationship with the company.

In February, Citi laid out a plan to target its cardholders with tailored reward offers encouraging them to open up digital checking and savings accounts with the bank, yielding strong initial results.

The firm’s 65,000 ATMs, 77% of which fall outside of the bank’s six primary markets, support that effort, providing fee-free access to cash for digital-first customers.

In his presentation, Selva highlighted a slew of cities across roughly a dozen states, including Seattle and Dallas, cities where the bank also has key strategic partners in Costco and American Airlines, respectively. 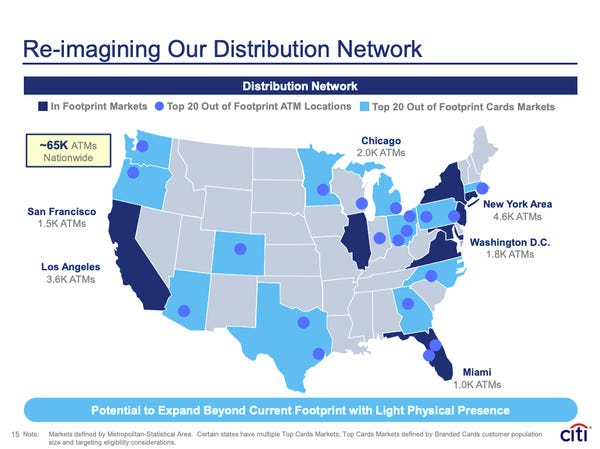 
For the big bank with the smallest retail footprint, this could mean new storefronts in select locations to support the company’s ongoing initiative to turn those millions of credit cardholders into digital banking customers.

“In terms of a footprint, we could selectively add new locations to augment the digital capabilities and the ATM network we currently have,” Selva said. “So we are open to adding physical distribution, but we want to do it where we start to see concentration of client activity outside of our existing markets. It will be about going where our customers already are.”

Citi’s expansion talk is understandable, given the encouraging numbers the bank has reported from its deposit strategy so far this year.

Moreover, two-thirds of those deposits came from customers outside the bank’s existing branch footprint.

Citi has a long way to go to catch up to Bank of America, JPMorgan, and Wells, and it’s unclear how much deposit share it can capture with a branch-light, digital-first approach. After all, each of those competitors is investing in upgraded mobile and digital experiences as well to go after the same customers.

But it’s been a winning strategy over the last year, according to the FDIC’s mid-year deposit report. Citi’s 8% growth in US deposits over the prior 12 months was best among the 10-largest banks in the country.