LIVE: Uber is set to begin trading in one of the largest US IPOs on record

Главная » MAKE MONEY » LIVE: Uber is set to begin trading in one of the largest US IPOs on record
May 10, 2019MAKE MONEY 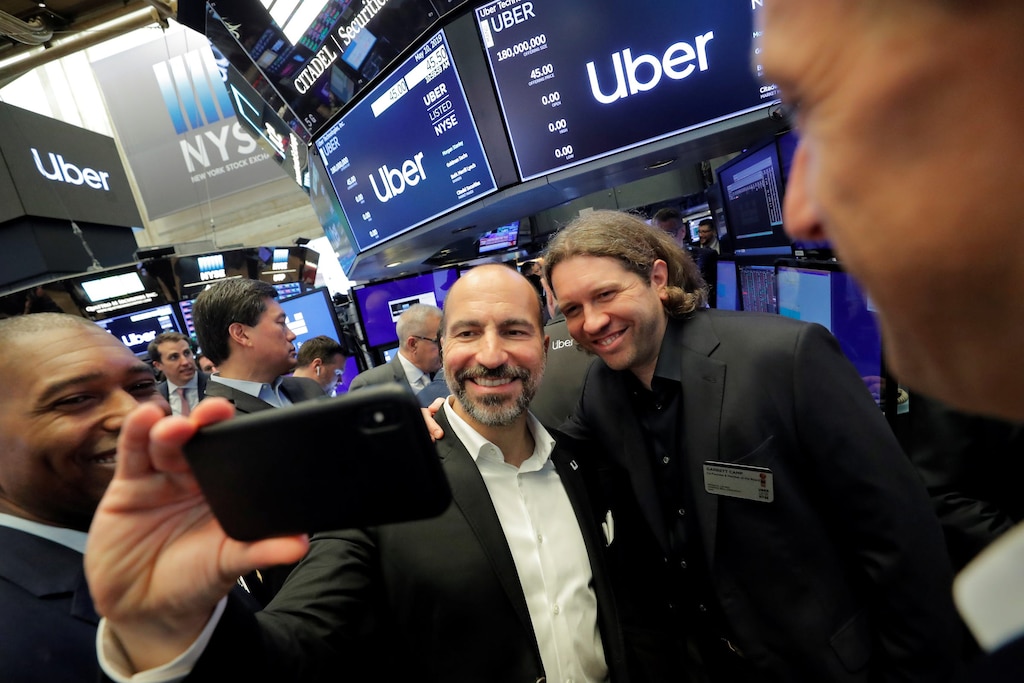 Uber fell 6.7% in its stock-market debut.

Shares opened for trading Friday on the New York Stock Exchange at $42 apiece, down from the $45 where they priced on Thursday evening. At $45 a share, Uber had an initial market cap of $75.5 billion — well below the $120 billion valuation that Wall Street banks were floating in October.

Still, the San Francisco-based company’s valuation ranked among the largest US debuts on record, trailing only Alibaba’s $169 billion debut in September 2014 and Facebook’s $81 billion debut in May 2012, according to a Dealogic analysis. Shares had risen to $43.93 apiece as of 12:17 p.m. ET.

The lowered pricing came in the face of its rival Lyft’s stunning decline on the public market since debuting in late March. Lyft shares plunged to a record low earlier this week after its first quarterly report as a public company fell flat with investors. On Friday, Lyft shares were down as much as 8% ahead of Uber’s debut.

Friday’s IPO brought together the cofounders Garrett Camp and Travis Kalanick as well as Ryan Graves, the company’s first CEO. Kalanick entered the trading floor with his father, and they were greeted with an “enormous applause,” according to the New York Times tech reporter Mike Isaac.

Just ahead of Uber’s debut came nationwide strikes by both Uber and Lyft drivers, attempting to raise awareness about low pay and working conditions. The strikes highlighted the regulatory risk both ride-hailing companies face in various markets in the US and, for Uber, around the world.

Uber’s IPO also comes at a delicate moment for the stock market, which has remained near record highs even with volatility picking up amid an escalation in trade tensions between the US and China.

A volatile market isn’t ideal for IPOs, as it shakes investor confidence and creates an uncertain environment during an important phase for newly minted shares.

Some initial public offerings were delayed earlier this year over the partial US government shutdown and a historically dismal fourth quarter.

Morgan Stanley, Goldman Sachs, and all 27 other banks working on Uber’s mega-IPO

Uber may owe another $128 million to Google for awards related to Uber vs. Waymo

Uber and Lyft drivers explain why they are striking