Next recession timing is spring 2020, cause will be rare, SocGen says – Business Insider

Mark your calendars: Spring 2020 is when the next recession will arrive, according to Societe Generale.

Many other firms, including Goldman Sachs, are taking the stock market’s return to all-time highs as a cue that the economy will rebound in the months ahead.

But SocGen is unfazed, singling itself out as a contrarian on Wall Street with this call. It forecasts gross domestic product growth of 0.7% next year, which is well below the consensus expectation for 2.3%.

If SocGen’s forecast is correct, a recession would unexpectedly end the record-long expansion, injure the bull market in equities, and throw a wrench into the reelection campaign that President Donald Trump has tightly hinged on his economic wins.

“The US recession is in our view likely to be a relatively short-lived affair, with negative growth expected to persist for only two quarters and sub-trend growth for four,” said a team of economists led by Klaus Baader in their 2020 outlook.

The general inability of economists to forecast recessions with precision is not lost on SocGen. After all, they originally expected a recession to arrive in 2018, only for tax cuts to keep the economy afloat.

However, their conviction has increased over time, and they now doubt that the stimuli needed to support the economy will be adequate going forward. They see limited scope for more fiscal support after the massive and politically divisive tax cuts. And, the Federal Reserve has already offered a series of insurance rate cuts this year that returned its benchmark interest rate towards zero.

Also this year, recession signals like the yield curve and probabilities measured by the New York Fed hit post-crisis milestones, indicating that all was not well.

Labor costs at root of next recession

But none of these things is the most significant trigger for the next recession, in SocGen’s view.

“Rather, we see the next US recession as being brought on by an intensifying profit squeeze, which in turn is caused by rapidly accelerating labor costs,” Baader said.

In other words, the tightening labor market and its subsequent impact on corporate profits are the factors that could cause the next recession, not classic catalysts like asset bubbles, credit crunches, and Fed errors.

SocGen’s concern is pegged around the fact that labor productivity is growing at a below-average rate and remains stuck in a tight range. Meanwhile, the growth of unit labor costs — a gauge of how much workers are contributing relative to how much they’re paid — is at a five-year high.

This is not the first time productivity and wages have gone in opposite directions. However, Baader says previous episodes during this expansion were driven by short-lived disruptions such as the weather.

Now that they’re in place as trends, he expects corporate profit margins to continue shrinking, ultimately causing a brief recession in the spring. 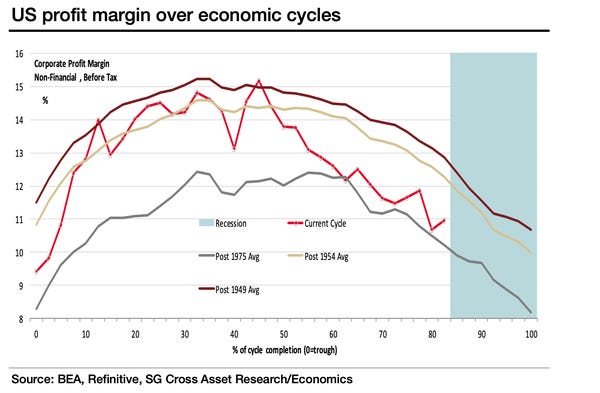 SocGen has followed up its longstanding calls for a recession with recommendations for how investors can prepare.

The firm’s cross-asset strategists foresee a 10-15% drawdown in the stock market between the second and third quarters to coincide with when they expect a recession to hit.

In light of this view, they provided the following three trading ideas in a recent client note: