Copper prices are signaling a stock-market sell-off may be brewing.

The red metal has been the “single-best leading indicator for stocks over the past 18 months,” and is flashing a warning sign for risk assets in general, according to a note put out on Wednesday by Tom Essaye, founder of Sevens Report Research.

“Looking all the way back to early 2018, copper chopped lower the entire month of January, disconnecting with the stock market with which it is normally very closely correlated,” he wrote.

Since then, Essaye says the price action in copper has been leading the stock market: 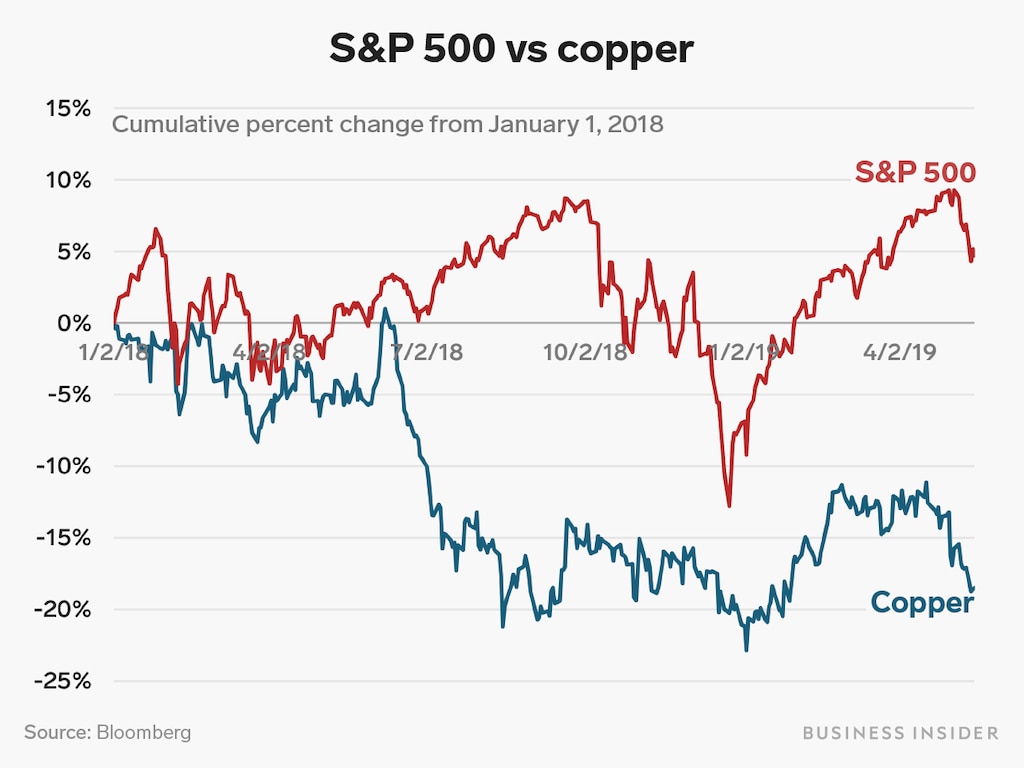 “We point all of these instances out, because over the last 18 months, no leading or concurrent indicator has been better than copper at forecasting the next move in stocks, both higher and lower,” Essaye added.

Copper prices have been under pressure in recent weeks as a slowing Chinese economy and rising trade-war tensions between the US and China have sent investor net-long positions to the lowest level in four years, according to Ross Strachan, senior commodities analyst at Capital Economics.

“Arguably the decline in investor positions would have been consistent with prices falling to around $5,600 per tonne, rather than remaining close to $6,000,” he wrote, citing prices on the London Metals Exchange.

That suggests a drop of about 7%. And, according to Essaye, it would mean bad news for the stock market, which has seen renewed volatility after President Donald Trump announced last week that the US would hike tariffs on $200 billion worth of Chinese goods. A few days later, China retaliated by increasing tariffs on $60 billion of US goods.

The stock market has gone virtually nowhere over the last eight months. Sure, there was the big sell-off in the fourth quarter as investors worried about the possibility of further rate hikes, and the ensuing rally that developed when they didn’t come. But overall, the market is pretty much where it was last October. The problem is the backdrop is deteriorating.

“While the prospects of a ‘no-deal’ between the US and China is directly impacting risk sentiment, tariff hikes will be an additional burden for US companies and weigh on future earnings,” analysts at Fitch Solutions Macro Research said in a recent note.

They added: “While a deal is still possible, this recent decision increases the downside risks to global trade and growth, deteriorates risk sentiment and weighs on financial markets.”

Of course, all of this comes as the Federal Reserve’s tightening cycle draws to a close. The central bank has raised interest rates nine times since late 2015 as it attempts to normalize its balance sheet after coming out of the Great Recession.

“There is a perception among some investors that the Fed’s tightening cycle is already priced into US equities,” said UBS strategist Francois Trahan in a recent note to clients. “This notion could prove to be a major surprise this year, a disappointing surprise that is.”

Read more: UBS’ new equity chief warns that a 10% plunge in the stock market this year will catch investors off-guard — and outlines how to protect against losses

He notes that GDP was the strongest its been in years during the first quarter, and that a strong economy typically occurs at the end of the Fed’s rate-hike cycle.

“In short, it takes a full two years for changes in the federal funds rate to be fully reflected in GDP growth,” Trahan added. “At least, that was the historical dynamic before the fed funds rate hit zero in late 2008. Most importantly, perhaps, there is no reason to think that this relationship will be any different today.”

He sees the S&P 500 falling 10% to 2,550 as the higher borrowing costs take their toll on the US economy. That wouldn’t be too different from the downside that Strachan sees for copper.